We have a highly experienced Board and management team, undoubtedly one of the best credentialed gold development teams in Australia with a proven history of developing projects successfully, quickly and cost effectively. We are comprised of a team of highly competent mining engineers and geologists who have overseen the successful development of gold projects in developing countries such as the Bonikro Gold Project in Cote d’Ivoire for Equigold NL and more recently, Regis Resources Ltd.

Prior to Emerald acquiring the Cambodian Gold Projects through the off-market takeover of Renaissance Minerals Limited (ASX:RNS delisted), the Board and management assessed many prospective gold development projects around the world.

Since 2016, Emerald’s main focus has been the exploration and development of the Cambodian Gold Projects which comprise of a combination of 100% owned granted licences, applications and earn-in & joint venture agreements covering a combined area of 1,239 km².  The 100% owned Okvau Gold Project (‘Okvau Gold Project’) is the Company’s most advanced project which is located approximately 275 kilometres north-east of Cambodia’s capital city of Phnom Penh in the province of Mondulkiri.

In May 2017, Emerald completed a Definitive Feasibility Study (‘DFS’) on the development of the Okvau Gold Project which demonstrated a robust project with an Indicated and Inferred Mineral Resource Estimate of 1.14Moz at 2.0g/t Au producing approximately 106,000 ounces of gold per annum on average over 7 years from a single open pit.

In July 2017, Emerald increased its ground position in Cambodia prospective for large scale intrusive related gold systems from 374km2 to approximately 1,500km2 following the grant of a new exploration licence and having reached agreements to earn-in to five additional exploration licences covering a combined area of approximately 1,124km2 in close proximity to the Okvau Gold Project.

In November 2017, Emerald achieved a significant development milestone by signing an Environmental Contract with the Cambodian Ministry of Environment providing environmental approval for the Okvau Gold Project.

In November 2018, Emerald successfully completed a placement to raise A$27 million (including $12.2 million contributed by the Directors of Emerald) which provided funding to be used towards the commencement of development activities at the Okvau Gold Project.

Since 2018, the development activities have included successfully completing the resettlement of 62 local families and site works to remove abandoned structures away from the Okvau Mining Licence area, the installation of a security fence around the Project Development Area (“PDA”) to ensure the safety of personnel, visitors and wildlife, construction of a 35 tonne bridge across the Prek Te River, substantial completion of upgrades to the existing 50km of dirt roads and construction of 14km of new road to site which will allow for all year continuous access to the Okvau site. 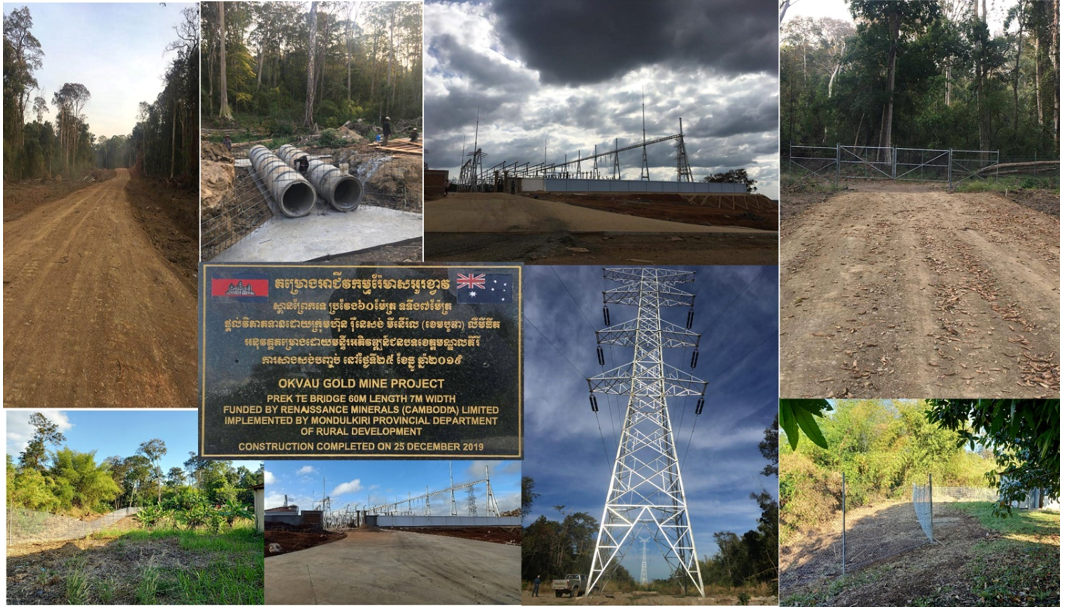 In June 2019, the Company entered into an investment committee approved term sheet with Sprott Private Resource Lending II (Collector), (LP) (“Sprott”) to provide a US$60 million facility to be utilized towards the financing of the Okvau Gold Project. Sprott's financing of the Okvau project will combine the strong development credentials of the Emerald team with the financial strength of the respected Sprott group.

In November 2019, Emerald critically examined and pursued improvements in all aspects of the Okvau Gold Project economics applied to the May 2017 Definitive Feasibility Study (“DFS”). Based on the prevailing gold price at the time of US$1,450/oz. and updating the key assumptions and inputs, the NPV (5%) of the Okvau Gold Project significantly improved to US$337M (A$488M) pre-tax and US$238M (A$345M) post-tax with an outstanding Internal Rate of Return (IRR) of 69% pre-tax and 57% post-tax.

In December 2019 the Mineral Investment Agreement (‘MIA’) was signed which provides certainty and stability of the fiscal regime for the development and operations of the Okvau Gold Project. Following confirmation of the key fiscal incentives of the MIA, the key assumptions and inputs of the DFS were reviewed resulting in a significant improvement in the NPV and IRR of the Project.

In January 2020, Emerald successfully completed a placement to raise A$75 million which provided funding to be used primarily towards advancing development activities at the Okvau Gold Project and the regional exploration program on Emerald’s 1,426km² Cambodian exploration footprint.

In March 2020, Emerald and Sprott signed the Credit Agreement for the US$60 million Okvau Debt Facility.  The signing of the Credit Agreement was a significant milestone for the development of the Okvau Gold Project and follows the completion of an extensive due diligence process and preparation of all facility related documentation. Financial close and first draw down remains subject to customary conditions precedent which includes execution of all facility documentation and perfection of security.

The Okvau Debt Facility has also provided access to a US$100 million Acquisition and Development Facility to fund future development and acquisition opportunities with the aim to grow the Company through the procurement of value adding assets for subsequent developments to create a multi asset gold producing company.