First movers on the Cambodian Frontier

Renaissance Minerals (Cambodia) Limited is dedicated to the exploration, development and operation of the 100% owned Cambodian Gold Project.

The company is 100% owned by Emerald Resources NL, an ASX-listed company established with international capital.

In May 2017, the company completed a Definitive Feasibility Study (DFS) on the development of a 2.0Mtpa operation at its Okvau Gold Deposit located in the Mondulkiri province of eastern Cambodia. The DFS was completed to +/-15% level of accuracy. This was updated on 26 November 2019.

The DFS confirms the robust nature of the Project and following these positive results the Board of Directors has approved the Project to proceed to construction subject to finalising financing arrangements.

In July 2017, Emerald increased its ground position in Cambodia prospective for large scale intrusive related gold systems from 374km² to approximately 1,500km² following the grant of a new exploration licence and having reached agreements to earn-in to five additional exploration licences covering a combined area of approximately 1,124km² in close proximity to the Okvau Gold Project. 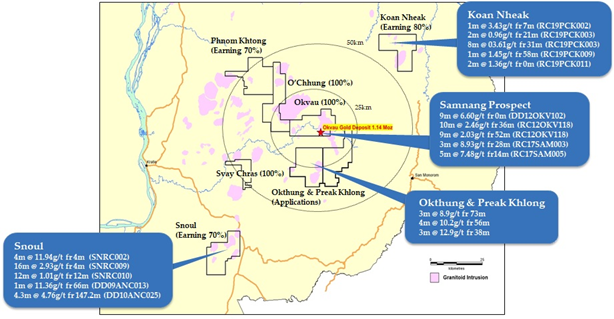 Emerald recently completed a first pass RC drill programme on the previously announced gold-in-soil Peacock anomaly (refer to ASX Announcement dated 3 August 2018). The 1,194 metre (15 collars) RC drill programme was designed to both test the peaks of the gold-in-soil anomalism and also the most prospective geophysical IP anomalies and was drilled down to an average depth of 80 metres (refer to Figure 2).

10 of the 15 drill holes intersected zones of quartz breccia with sulphide mineralisation. Each of these geologically noteworthy zones were associated with low level (>0.1g/t) gold mineralisation confirming the existence of a gold mineralised system with the best intersection (8m @ 3.61g/t) being hosted by the diorite intrusive (refer to Figure 2). The significant drill intersections are listed in Table 1. 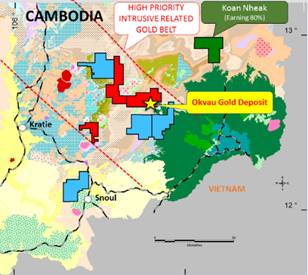 The drill programme confirmed the soil anomaly and identified that the best opportunity for additional exploration success is within the diorite itself. The geological logging has identified the mineralisation as a similar style to the 1.14Moz Okvau Gold Deposit being both hosted in a diorite intrusive and associated with sulphide mineralisation. Figure 3 is a cross section of the drill line containing the best intersection, 8m @ 3.61g/t in hole RC19PCK003. This significant intersection is planned to be tested northward along strike into the prospective diorite intrusive when drilling on untested gold-soil-anomaly, Peacock North (refer to Figure 4) commences early next year. 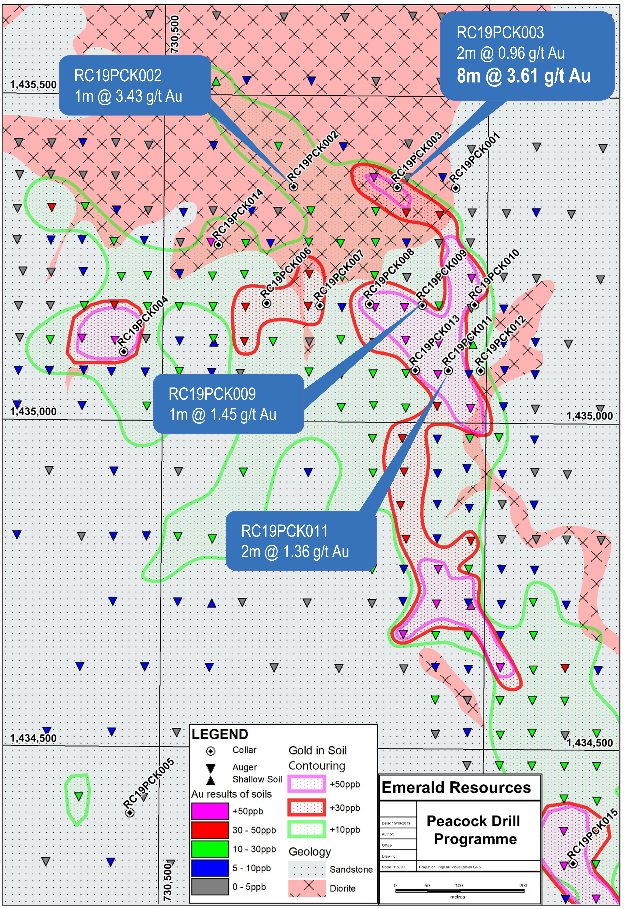 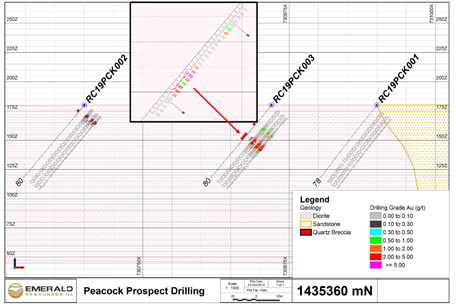 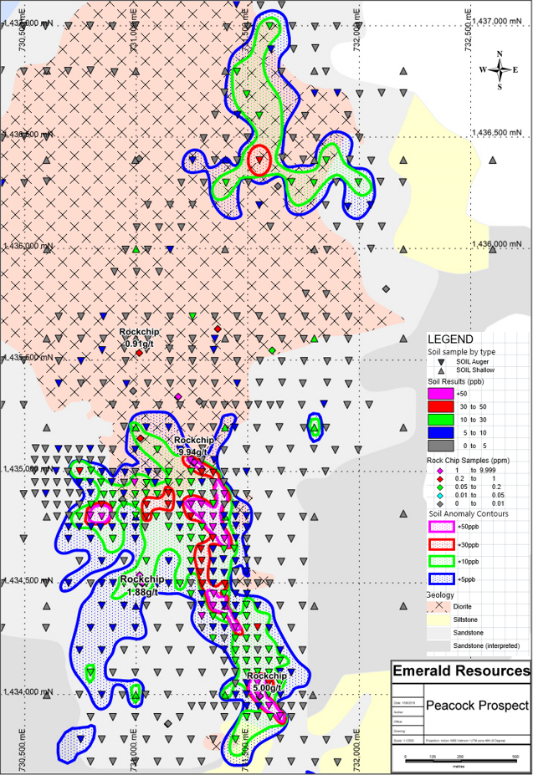 The current soil sampling programme followed up on Emerald’s initial exploration programme (refer to ASX Announcement dated 28 November 2018) which consisted of infill auger samples taken across the core of the surface geochemical anomaly previously identified by Southern Gold.  During the current programme, additional auger soil samples have infilled the Oh Tron prospect to a nominal 100m x 50m grid (refer to Figure 5). These results infilled the 500 metre gap between the eastern and western anomalies, joining them together as well as increasing the core of the highest grade contour (+50ppb) by 300 metres on the eastern side of the anomaly.

To date, 950 Auger samples have been taken from the Oh Tron prospect by Emerald. These results will assist with the planning of a proposed drill programme. 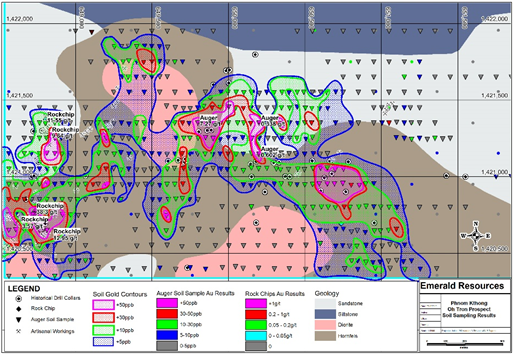 The Snoul Project is within a Joint Venture with Mekong Minerals Ltd (‘Mekong Minerals’, unlisted) whereby Emerald may earn up to an 70% interest (refer to ASX Announcement dated 13 July 2017). The Snoul Project is located approximately 70 kilometres to the south-west of Emerald’s Okvau Gold Deposit. Airborne magnetic data indicates the project area contains at least six intrusive bodies with associated hornfels alteration haloes. Gold occurrences within the licence area are associated with a series of north-west striking sulphide rich altered veins with a cluster of diorite intrusions.

Emerald has received 333 results from a recently completed auger soil geochemical programme designed to follow up on previously announced (refer to ASX Announcement dated 3 August 2018) auger programme and historical drill results within the Snoul Project.  Historical drilling consisted of a total of 10 RC holes and 37 diamond holes and was targeted partly on a gold anomaly defined by shallow soil samples.

These recent results have infilled the Ok Pok anomaly down to a nominal 100 x 100m spacing and extended the anomaly to the north by an additional 500 metres and identified a new 1,000m x 400m soil anomaly on the Sam Rong prospect (refer to Figure 7).

These results will assist with the planning of a proposed drill programme to infill the significant results referred to below. 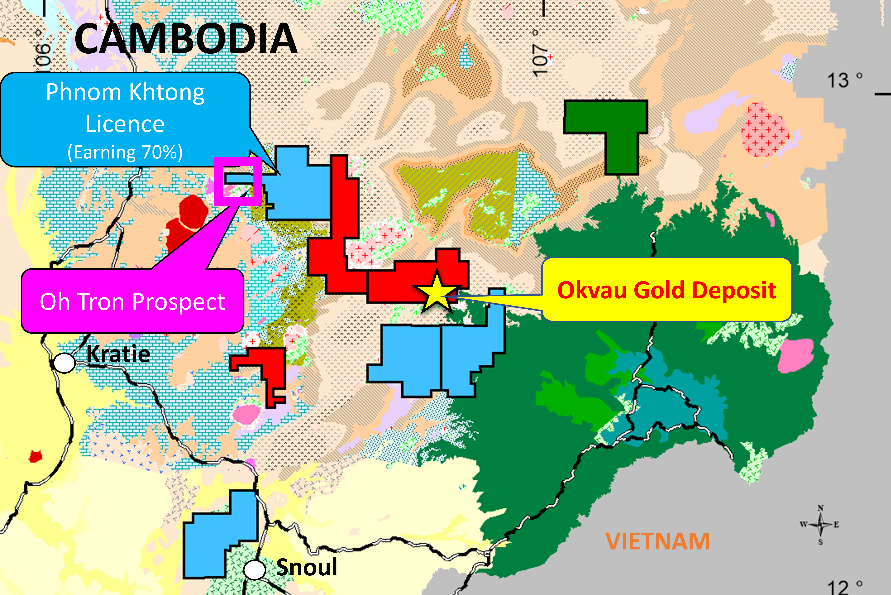 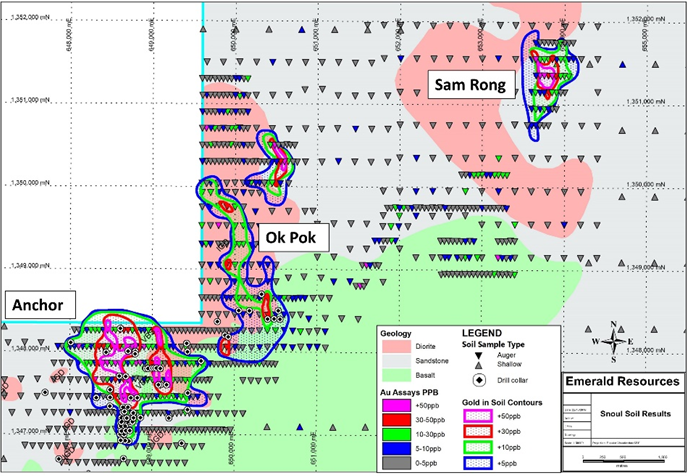 These exploration licences are considered highly prospective for gold mineralisation. Systematic wide spaced shallow soil sampling has been completed on 64% of the exploration licences (by previous operators), principally over mapped and interpreted intrusives and associated alteration haloes with the aim of identifying near surface gold and base metal mineralisation. 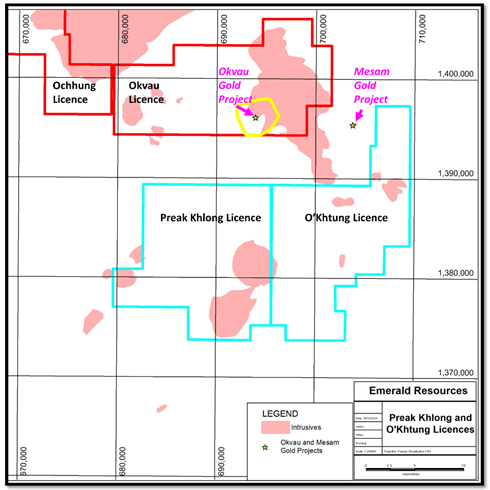 Within the eastern part of the Preak Khlong licence airborne magnetics have identified two areas of interpreted intrusive with hornfels alteration haloes (refer Figure 9). The two prospect areas identified for follow up drilling are the ‘Preak Khlong NW Prospect’ and the ‘Gossan Prospect’.

At the Preak Khlong NW Prospect, a 100 metre wide alteration zone hosts a consistent gold mineralised corridor with a thickness of 10 to 30 metres. A total of 7 RC holes and 6 diamond holes have been drilled at the Preak Khlong Prospect which returned highly encouraging results. Auger soil sampling over the identified soil anomalies and follow up drill holes are being planned to comprehensively delineate the prospective mineralisation on this prospect.

Artisanal workings at the Gossan Prospect contain quartz-galena-pyrite veins. Sections of the area have a well-formed laterite cover which was previously mapped as gossanous material, hence the name of the prospect. A total of 17 diamond holes have been drilled at the Gossan Prospect. Auger soil sampling and follow up drill programmes are planned to confirm the existing drill intersections and to test the full extent of potential mineralisation.

All of the identified gold in soil anomalies will have infill auger soil sampling programmes completed on them to better delineate and expand on the historical anomalism and assist with targeting of future drill programmes. 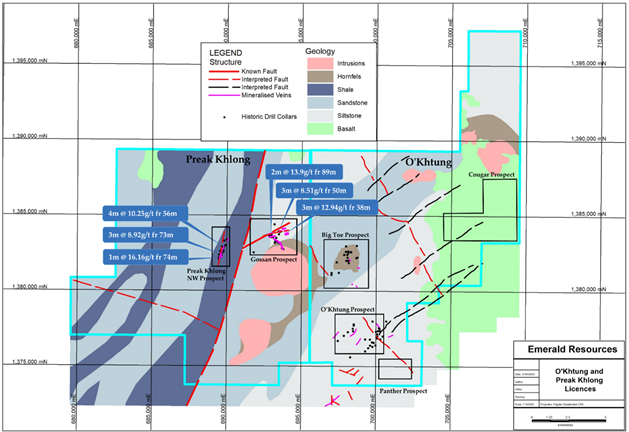 The Preak Khlong and O’Khtung exploration licences were previously under application and granted to Emerald in April 2020.