A large section of Indo-China, western Laos, Cambodia and southern Vietnam is underlain by Permo-Carboniferous metamorphosed shallow marine to upper arc volcanic rocks referred to as the Kontum Metamorphic Complex or Kontum Massif. This metamorphic complex was formed in rifting conditions following the Indo-Sinean collision in the Carboniferous.

The Indo-China Block is separated from the South China Block by the Jinshajiang Aillaoshan Suture Zone.

The Kontum Massif is bounded to the north by the Troung Son Fold Belt and to the south by the Loel Fold Belt. These fold belts contain volcano-sedimentary sequences with andesite and minor limestone.

The Kontum Massif, now a tectonic stable plate, was intruded in Cretaceous by small to medium sized dioritic to granitic bodies. The rhyo-dacitic intrusives are often associated with copper and gold mineralisation such as at Sepon in Laos.

The various lithologies in these intrusives are considered to result from fractionation from a common magna source. Some of these intrusives such as at the Okvau Deposit have significant hornfelsic haloes.

A major part of the region is overlain by Jurassic-Cretaceous sediment deposited in the Khorat sag basin. These sediments, in places, are overlain by Neogene-Quaternary basalt flows.

The Okvau Deposit is largely hosted in a Cretaceous diorite intrusion emplaced within an upper Triassic metasedimentary host rock package. Gold mineralisation is contained in a north-east trending fracture set in a narrow off-shoot or apophyses from a larger diorite intrusion however extends beyond the diorite contact into the metasediments.

Gold mineralisation is concentrated along a network of brittle/ductile shears and arsenopyrite-rich sulphide veins. The mineralized shears typically comprise 10 to 50 metre wide core of strongly altered, fractured, and/or sheared rock locally with a weak planar fabric, surrounded by 0.5 to 2 metre wide less intensely altered halos which retain relict diorite texture. Variably deformed pyrrhotite, arsenopyrite and/or pyrite-rich layers up to 10 metres wide also commonly occur in the core of the shears.

The greater width of the alteration haloes around the shears, and textural evidence of movement along the shears implies they, rather than the narrow veins, were the principal fluid conduits within the Okvau Deposit. Gold-bearing fluids presumably accessed the fracture mesh which hosts the auriferous sulphide veins via the more strongly altered shears. 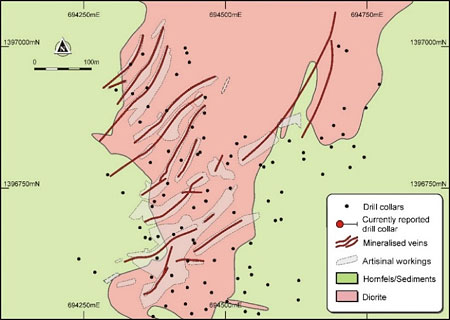 The principal controls on the mineralisation are interpreted to be parallel to the western diorite contact with the metasediments however the low angle dipping planar shears (metasediment bedding parallel) also exert influence on the 3D distribution of the mineralisation.  Gold grade continuity is therefore best defined as parallel to low dipping shears within the diorite which have an orientation in a shallow to moderate dipping plane to the south-east.